Launched in August 2006, the clothing line, George M.E. by sportswear designer Mark Eisen was Wal-Mart's attempt to join retailers such as Target and Kohl's who have signed on established fashion designers to create a line of thrifty chic pieces for their stores. (Mark Eisen's Karoo label is at  high-end retailers Bergdorf Goodman, Shopbop.com, Nordstrom and Neiman Marcus.)

The Georg M.E. line was introduced at New York Fashion Week and garnered good reviews but Wal-Mart shoppers did not bite. Earlier this year, when it was announced that Wal-Mart would be pulling its foray into cheap chic from many of its shelves, there was much talk as to why the effort failed.

Candace Corlett, partner with consulting firm WSL Strategic Retail had this to say: "The displays are not attractive, the clothing doesn't jump out at you," she said. "Wal-Mart has not shown us that they understand the power of emotional advertising in the store."

Said Corlett,  "Unless Wal-Mart takes fashion and puts it on a pedestal which shouts 'Come and look at me!', this endeavor will take a lot of energy without the payoff." 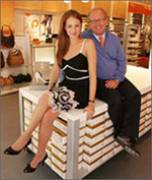 When enlisting designers to create  trendier shoes and accessories at their store, (first signing on emerging designer Laura Poretzky and this year adding Lela Rose), Payless Shoe Source realized the need for atmosphere in the shopping experience.

They planned a completely new store layout. Bright new retail spaces, Fashion Lab stores and the "hot zone" stores which features  Fashion Lab's design at the front of the stores in combination with the old store format, were rolled out to introduce the on-trend shoes and accessories.

The plan was that a "new format (would) attempt to lure 20-to-30-year-old women looking for something a bit trendier than they might expect to find at the local Payless". 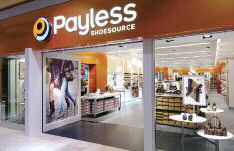 Further descriptions of the new Payless aesthetic from the referenced article:

"The store looks almost airy. The paint is white (with dabs of Payless orange). The side walls are curved for a feel of movement."

Wal-Mart is renovating many of its stores, as it does from time to time. Apparently it has not happened yet at my area's local store because the lighting can be describes as rather grim and dismal and the store's atmosphere cluttered and crowded. Wal-Mart has had marketing mis-steps such as the infamous fake blog and a Facebook campaign that had less than hoped for success. Also controversy over the company's business ethics have bruised the corporation's image. Despite ads placed in Vogue, including one that featured Dayanara Torres, former Miss Universe and ex-wife of pop's Marc Anthony, the trendy line Metro7 which launched in 2005 failed to capture consumers. 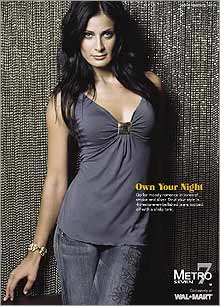 All the ad campaigns, media makeover of image, it seems, will not translate if the in-store shopping experiences fails to live up to shoppers expectations from ambitious advertising. So, hey Wal-Mart 'lighten up'!