Trendsetter Maria Sharapova inspired as much talk about her outfit as her on-court play at this year’s Wimbledon. The tennis star said of her tuxedo inspired ensemble from Nike: “I think it’s very flattering, especially on women, to be able to pull off a look that’s basically men’s wear. You know, from very tailored jackets to things that are a little bit oversized as well. You know, I love tuxedo jackets, I love things that are actually a little bit baggier and wide.”

Maria along with fellow fashionista Serena Williams who walked onto the court in a short trench coat, seems to be spurred by the challenge of being creative while sticking to the Wimbledon rule of white tennis attire. “I thought, why not do shorts this year? I’ve never done it at a grand slam. You know, if there’s one place to do it, it’s here.  “… it was fun doing it because, you know, it’s hard to do things different with white.”

The tux jacket, shirt and shorts is a menswear look in women’s fahion that actually can accentuate the femininity of the wearer. The straight lines and abrupt change of direction in lines – the angularity of the clothes can be a frame that highlights the curviness of a woman on some figures. The wide-legged look of the pants add the sweep and grace that says ‘her‘  and the sheer fabric of the blouse adds delicacy. 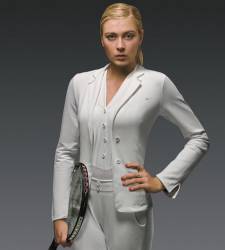 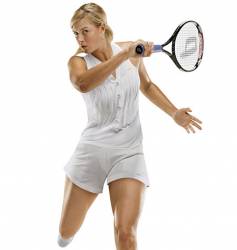 I am not sure how this would fair on a very curvy woman but could be done with modification to the clothing combination worn by the tall and lithe Sharapova.

Sophisticated and elegant, strong yet feminine. Definitely a menswear look to add to your style inventory. Get inspired and adapt this look to your personal style and figure.  (Today Sharapova lost in a stunning knockout to  Alla Kudryavtseva, 6-2, 6-4, but she will always be a stunning fashion knockout, though I don’t know how much consolation that would be to Sharapova after this surprising upset at Wimbledon.) 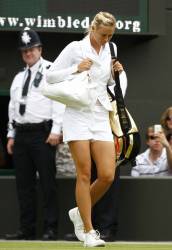 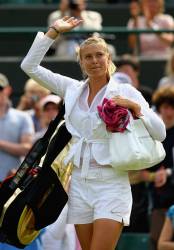 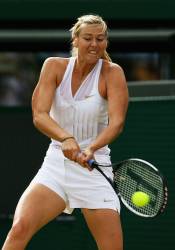 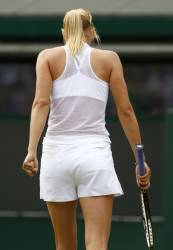