France's Tatiana Golovin wore red shorts under her skirt because "they say red is the color that proves you're strong and you're confident".

Venus Williams said "I really haven't played in shorts before, but my skirt was so big, I couldn't fit it, so I had to move to the shorts immediately." 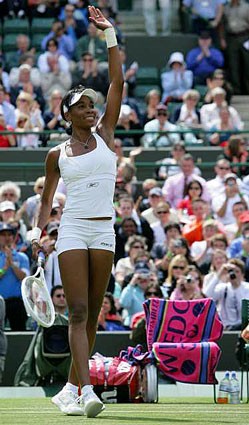 Roger Federer wore customized Nike tennis shoes with his initials, some gold embellishments and mini-Swiss crosses on to represent his four Wimbledon victories.

"I think it's important to look good on the court. I think we could have better outfits on tour in general," said Federer.

"I see that players are more aware now of the details, that the headband matches with the shorts, so forth. I always thought that was important, you know, that the whole entire outfit matches together." 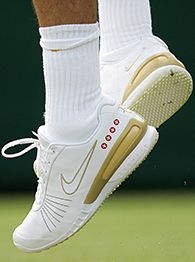 It's all about the game but the game of fashion and style always at least gets sideline attention and this year's Wimbledon is no different. Tuesday, Maria Sharapova got noticed for her "swan dress" along with her on court finesse, and Venus Williams wore shorts as brief as her  6-2, 6-2 win over 170th-ranked Hana Sromova.  The focus on the tennis outfits is usually on the women players but Roger Federer made sure the men were sartorially represented by wearing customized shoes.

As Tatiana Golovin fielded numerous questions about choosing the red shorts as part of her Wimbledon attire, to the  question    "Do you get the chance to shop a lot?"  Golovin answered, "I'm from Paris."   Lucky Girl! 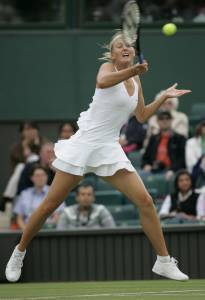 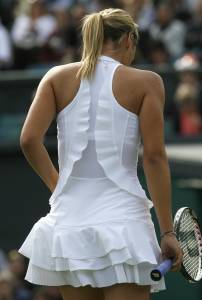 Maria Sharapova in her "swan dress"